It struck me that there aren't any pictures of the finished reliquary on here yet, must make for peculiar reading. So here it is, in all its secretive glory. 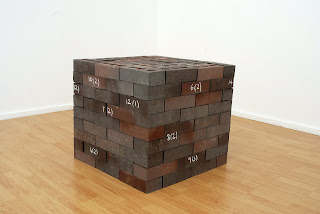 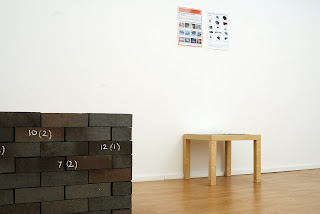 Thanks to Andrew Branscombe for taking such good pictures
Posted by B at 3:15 AM No comments:

Anna-Bethan from ve strata on Vimeo.

Here is the video of us collecting the relics from the ABC cinema site, wearing our pinnys and protective gloves.
Also is a timelapse of the cleaning of the relics and the process we went through to build the reliquary.
Posted by Anna Francis at 10:35 AM No comments: 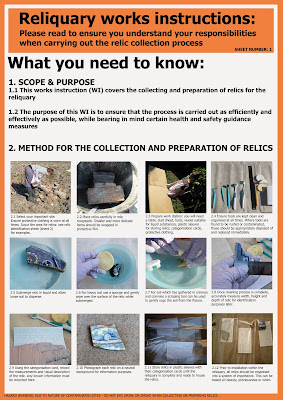 I think there will be more to come on here as we reflect on our days together.
We haven't got the sound piece we made on, or the video time lapse of us working.
But for now, there is just my poster to get on here and this to print out for people to read at the opening. I am really tired, but really pleased with what we have managed to do.
Posted by Anna Francis at 9:41 AM No comments:

The bricks were progress, they are so beautiful! After all the building and rebuilding we laid out our relics in order of importance. This was funny, we took turns to choose and used all sorts of criteria. We hid them away whilst we were building the final cube, the best things were at the bottom, near the centre and vice versa. I marked them in chalk on the outside.

I like this thing we made, it doesn't give much away.

Today we've bee writing about what we've done. First we wrote the exhibition text, it's at this point in a project we can start to see the path we've taken. We also made posters to explain. You made Sheet 1, which is an official-looking step-by-step instruction sheet for collecting and cleaning relics, including hazard warnings. It is quite black, it looks like your work. I made Sheet 2, Relic identification. It shows photographs of all the relics, with the descriptions we wrote yesterday, plus the number location mark to you can see where it is in the reliquary. It is very white, it looks like my work. 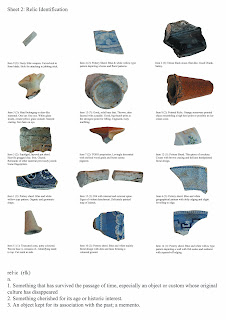 You're off getting the posters printed as I write this. We've made this blog public now.
Posted by B at 8:20 AM No comments: 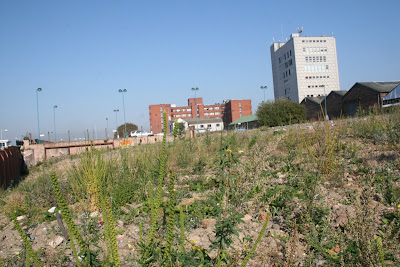 At the end of day one I was feeling quite anxious. We had spent the first part of the day walking about and gathering materials to work with. We kept returning to the need for bricks - but a phone call to Ibstocks had put us off finding some for free - so we were looking at buying them piece by piece. 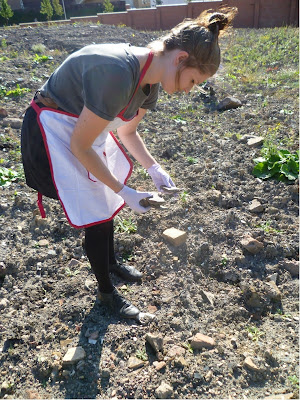 We had explored the ABC cinema site, and then decided to excavate some of the relics to be found there - bricks, bits of old pot and ceramic. 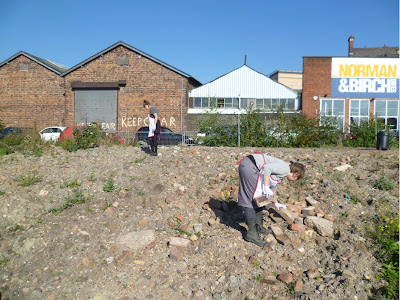 I wanted us to have a costume of some kind, returning to my comfort point - I find costumes make me feel better. Maybe its part of my disguise, I find it easier to work in public with some kind of protective cloak. We chose quite domestic looking outfits really, aprons and protective gloves, this seemed appropriate as we were collecting broken bits of crockery. 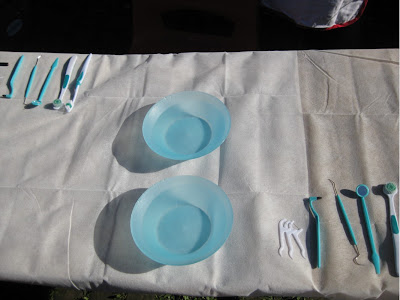 We collected the relics from the site and returned to the AirSpace back yard to set up a work station to clean and clear up the materials. 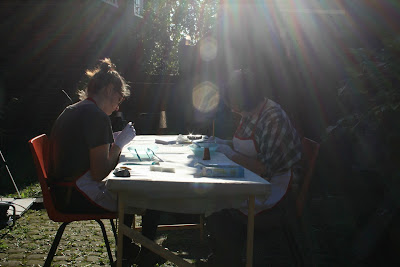 I like the way it became quite a contemplative activity, we spoke in bursts, sometimes about the work and what we were doing, but also about all sorts of things. 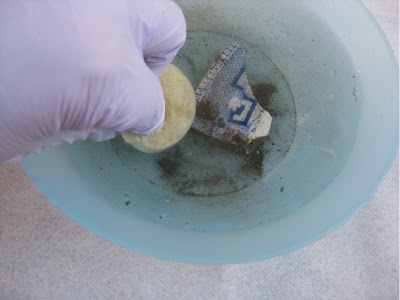 Overnight I though about what we had been doing, and realised that the conversations had were very important.
We arranged that I would go and buy bricks in the morning for the building of our reliquary. I like the idea of using bricks for something which is usually ornate, and overblown.
An amazing thing happened - you met someone who told you that there were tonnes of bricks at the Spode site we could use, so I went across there first thing Thursday morning to get some.
It turned out that these were part of the BCB show, and they had too many, so we could choose from an array of different coloured and differently made bricks. We had discussed using overfired dark coloured bricks, and there were some there that there were perfect. They were called Weinerberger bricks and ranged in tonal colours from black through to purple, and even gold.
We lugged them back to the gallery. Somehow having these weighty objects in the space felt good, we are getting somewhere. 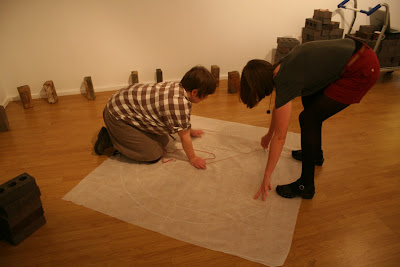 We talked about the shape that the reliquary could be, and thought that a domed one might be good but hard to build. We marked out the circle on the ground, and then set to work on building. 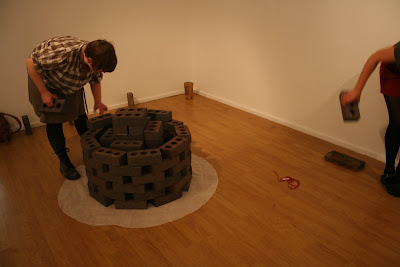 We tried a range of formations. The structure started to resemble a bottle oven, something which I was a bit dismayed at. Images of awful civic public art flashed before me...We finished it anyway, and then took a break for lunch. 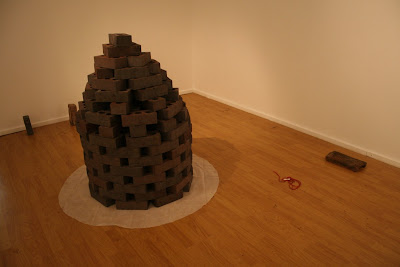 On return from lunch we started to work on a block version. We had discussed the Muslim Kaaba, and the idea of pilgrimage and religious celebration of deities hair. I wonder whether that big black box affected us in some way? 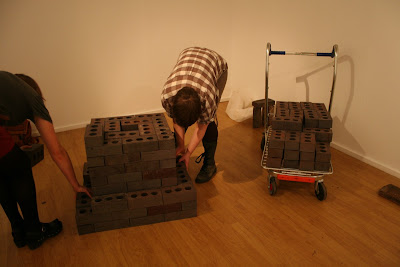 We tried a small footprint, and then a larger one, and eventually hit on our favoured shape, and rebuilt for perhaps the fourth and last time. By then we were both getting quite tired, not being used to this sort of labouring...Once complete we had just enough time to get changed and head over to the Spode site - for the grand opening of the BCB where your eels will be revealed.
So now, here we are this morning, we need to make a poster which explains our piece, and print out and finish this blog, and tidy the gallery. Better get on with it...
Posted by Anna Francis at 3:37 AM No comments:

When I arrived today there was a press visit in full swing. That was strange, they were here to see what we were all doing, but none of us quite expected it. I'd never been there before and we hadn't even started. I kept quiet.

I enjoyed looking around your building, I like that all your studios feel like real rooms, with bits of alcoves and wallpaper and fake terrazzo and real parquet. Most studios are chopped up large spaces.

I felt a little lost earlier today, as you say, a known sort of unhappy confusion that comes before you find a way. Scavenging is a good activity, it was good being in the rubble. We bought special dentists tools and aprons and a cloth in preparation for inspecting and cleaning up our finds. We documented them with note cards. We'll draw them too, to help explain how one goes about making a reliquary. As if we know.

I've just remembered my tutor Alison telling me that in some Arab countries, there's a belief that the most precious things are to be hidden away from sight. So that if you had, say, a treasure chest, the best things would be at the bottom, only brought out for the best people. The value of the thing rests, in part, on how many people have seen it - things might somehow be debased by a look.

Tomorrow we'll have some bricks. We will build something fit for our hoard.
Posted by B at 2:11 PM No comments: 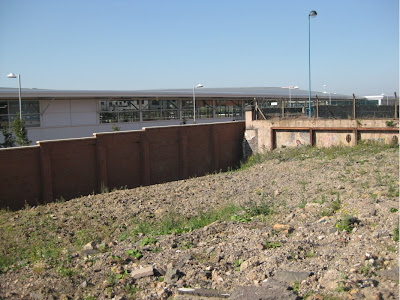 This feels like a residency to me, in the way that for the moment (right at the beginning of these 3 days together) I feel confused. Having done a number of residencies now I feel that this confusion is only the usual way of things. If I still feel confused tomorrow then I will worry.
So far we have wandered around a little bit. 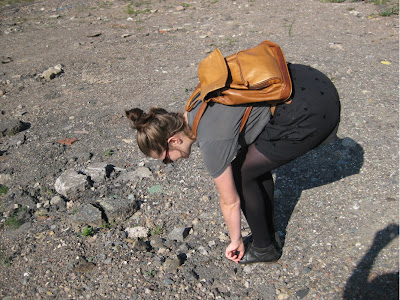 I have showed you the ABC cinema site which I have had a real interest in for quite some time now, due to its location in the Cultural Quarter. It was demolished to make way for Tesco.
We started collecting fragments of tiles and other bits of pottery from the mud, and looking at the plants. You said some of them look like wade, which can be used to make indigo. 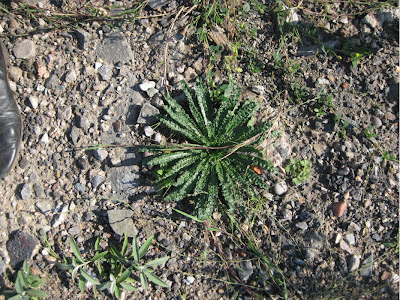 We talk more ab0out reliquairys, and I mention the black box in Mecca, where Muslims go on pilgrimage, and how I imagine a reliquairy like that. 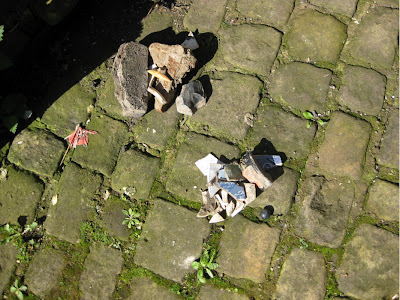 We think about putting these treasures we care collecting into a reliquairy. Also noting where we find them. Perhaps we can draw some of them first for the poster and classify them?
Also I show you the stick-up folder from Spode, which is like a manual for how to do something.
I like manual's and would like to make a manual for whatever we do here. Perhaps a manual that says - this is how you make your own reliquairy, or not even a manual? Perhaps a poster?
We talk about bricks again and how to get hold of some. You ring up a local brick manufacturers but they don't seem too interested. We decide to try to scavage some bricks from the ABC site, and see what comes from that...
Posted by Anna Francis at 5:22 AM No comments:

Bethan LLoyd Worthington and Anna Francis: A collaboration for the BCB

Two artists, paired at random: One from a Fine Art Background and one who works with drawing and ceramics, working to collaborate on a project which explores their approaches to practice, points of intersection and points of departure. The resulting project will be exhibited as part of the BCB in Stoke-on-Trent in 2011.